Hei alle sammen!!  (Hi all)  If you have not realized it… the weather has changed, the Summer has passed, the Fall season is upon us.  But the good news is that this may be, for a short-lived time, the peneste (prettiest) season of all.  The Aspen are turning yellow, the Maples are starting to show their varied colors and I have even noticed an Oak turn leaves a brilliant red.  In a week to three, it will be WOW time.  If you can, venture out in an automobile and observe the wonders that have been opprettet (created) for our glede (pleasure).  This is truly a blessing!

At the board meeting, we heard the report from the Nominations Committee and they have most of  the positions filled.  The full slate of kandidater (candidates) will be presented to you to stemma (vote) upon at the November Lodge meeting and Installation of the Board will occur at the December Lodge meeting.

The Medlemskap Middag (Membership Dinner) was finalized, with tickets being created and made ready for sale by Vice President Bonnie Mohs.  Tickets are $15 for a full pork loin meal which will be held at 6 PM on Tuesday, October 9, 2018 at Trinity Lutheran Church.  The Lodge meeting will follow with Jim C. Sinclair providing the evening program on Bfotografering (photography).  Jim is becoming very well known for his photography, especially of wildlife and scenery in Tamarac National Wildlife Area.  If you need tickets, please contact Bonnie Mohs or call a board member and we will assist you.  Huske (Remember), if you bring a “real” prospective member, your meal and that of your guest will be free to both of you.

Judy Fankhanl provided an interesting program on her trip to India, lunch was served and we all enjoyed the evening.

Norway’s sovereign wealth fund, the world’s biggest, is challenging companies to do more to protect the world’s oceans, including combating plastic waste pollution.

“The ocean is a vital part of the biosphere and an important part of the global economy,” said Yngve Slyngstad, the head of the fund.

A heavyweight on the global finance scene, the Government Pension Fund Global published a document outlining what it expects from the 9,000 companies in which it holds stakes.

Among other things, it urged them to integrate environmental ideas into their business strategies, suggesting for example that plastics producers plan a transition to a “circular economy” frugal in raw materials, and that fisheries companies incorporate forecasts on future stocks in their planning.

Greetings from your Foundation Director

We are so fortunate to have funds from the Silent Auction, and the Board of directors from our lodge have voted to add money from the general fund to bring our donation to the community up to $2,500 this year.  The agencies we are giving to include: Christmas gifts to Mahube and Crisis Center families, Food backkpack program, Let’s go fishing, Becker County Food Pantry, International Sons of Norway Foundation, Ski for Light, Boys and Girls Club, Emma Project, Fly Time, and the Crisis Center.  Thank you members of Viking Lodge for your generosity and caring.  Looking forward to seeing you at the membership dinner in October, don’t forget to get your tickets early so we have a head count for the cooks.  Bring a friend that would like to join and get your meals free.

Fall means blazing colors in nature, cooler temperatures, school activities – and, in October – Sons of Norway Foundation Month. Take a moment to learn more about how our members and lodges support each other through grants, scholarships, camperships and more; and how your lodge can be an integral part of giving back to the institution that gives so much to your lodge.

Please send warm thoughts (varme tanker) and prayers (bønner) this month to Bob Hoover who is undergoing treatments for bladder cancer and will now be having surgery at Mayo Clinic in Rochester. 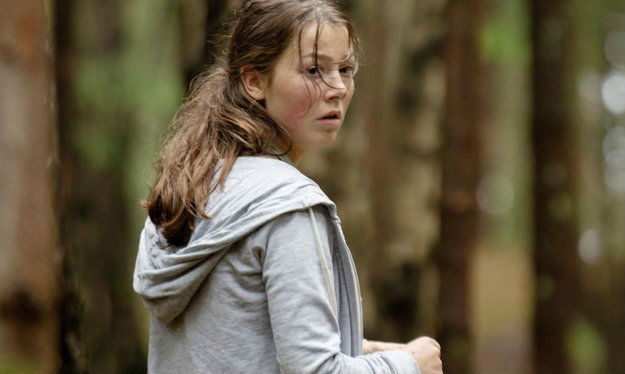 FILM RECOMMENDATION:
U – July 22, film about Anders Breivik’s 2011 massacre, is one of three contenders to be put forward for an Academy Award for Best Foreign Language Film. 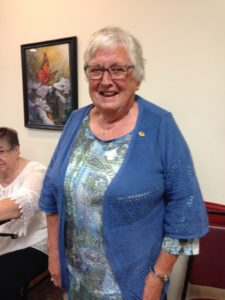 Bonnie M. gave information about Membership dinner: tickets are $15.00 each, to be held at 6 PM on October 9th at Trinity Lutheran Church.

Carol T reported that $2,500 will be distributed to various organizations as reported in the newsletter.

Linda Briard reported that the rates on annuities went up in July & talked about a life insurance plan that SON offers.

An interesting program was given by Judy Fankhandl about her trip to India.

Greetings from the Cultural Director

Well our next installment of Iconic things to do in Norway. 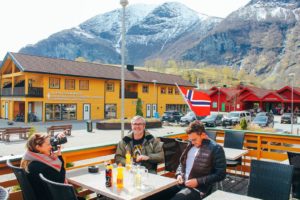 #3: Overnight in Flam; Instead of hopping directly onto the train, why not stay overnight?  This small village, small is the main word here, has roughly 4 houses. Both beautiful and relaxing and gives the perfect opportunity to sit back, breathe the fresh air and appreciate Norway for what it is. There is a gorgeous hotel as well as a brewery that will make for a nice evening. So in the morning, hop on the Flam which is

#4: and have a change in scenery of green mountains to stone formations.  A captivating journey. 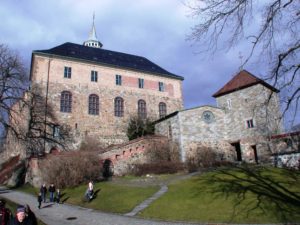 #5: Akershus; Welcome to Oslo’s medieval fortress. The stunning castle was built in the utmost Nordic fashion and has been well preserved despite the nine centuries that have come and gone since its construction. Walking on the castle’s ground is free of charge.  Located directly on Oslo’s harbor. A site to see on a crisp autumn day.

#6: See “The Scream” What a better way to highlight the cultural scene of Norway than by seeing its most famous painting right in its birthplace. Indeed, why not go and see for yourself the celebrated “The Scream” by Edvard Munch at the National Gallery of Norway in downtown Oslo. Make sure to visit Oslo’s museum island, also a good excuse for a boat ride in the harbor. And 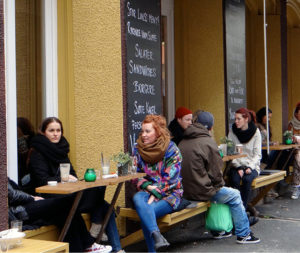 #7: Hang out with the cool kids in Grünerløkka; If you would rather sit on a sunny terrace and drink delicious Norwegian coffee the place to be is Grünerløkka – a neighborhood just north of the harbor. Its filled with quirky boutiques, trendy restaurants, hip locals, and gorgeous lively squares that always seem to be bustling with activity. The perfect way to end a trip to Norway on a high note. Well, the 7 most stunning and Iconic things to do in Norway.  Do you have any favorites?  The weather is getting cooler so go plan a trip to Norway and see the sites.  A beautiful time of the year. I came across something profound, I hope you think about it. With Halloween coming soon, a person wrote; Halloween night is when the barrier between worlds is thinnest and the dead and living walk together for one day.  Across cultures Halloween has been a night to remember and honor those who are gone while simultaneously celebrating life.  It is a whole day devoted to the notion of “Momento Mori” (Latin for “remember that you have to die”) encouraging people to enjoy the time they have.  While Christmas reminds you to give, Halloween reminds you to live”  Have a safe and enjoyable Halloween.  And live! Go take that trip to Norway!

a little in English…Too Much Chocolate, Not Enough Fish

Children in Norway consume too much sugar. They eat too little fruit, vegetables and fish.

What do children in Norway actually eat? The University of Oslo (UiO) wanted to find out. Every year, they check the eating habits of kids in 4th grade and 8th grade. The survey is called Ungkost, the young diet. This is the third time that youth food habits have been studied. This also took place in 1993 and 2000.

Most of the time, they get enough vitamins and minerals. The only thing they lack is vitamin D and iron. 4th graders get 196 grams (7 ounces) of fruit, vegetables and berries every day. The 8th graders get a little less. They eat 187 grams (6.5 ounces). But the experts do not like the kids to eat so little fish. They only eat 24 grams (0.8 ounces) of fish each day. 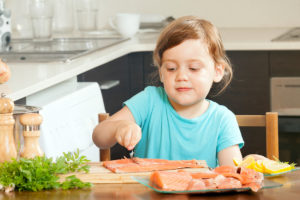 The official observance already had momentum: Almost 40 years earlier, President Calvin Coolidge had acknowledged the concept that Erikson had landed on North American shores nearly 500 years before Christopher Columbus. Leif Erikson Day had already been observed in Minnesota and Wisconsin since the 1930s and was established in South Dakota, Illinois, Colorado, Washington and California by 1956. 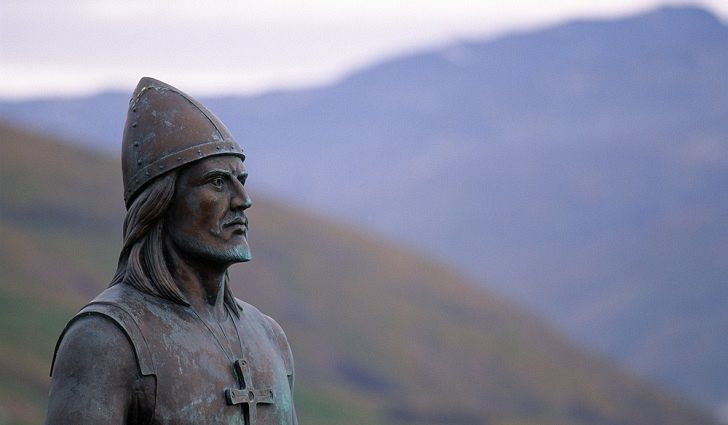 History reveals some fascinating details about the revered adventurer. Erikson was born around 960-970 A.D. in Iceland to Norwegian parents. He traveled to Norway and Greenland, so he is claimed by many, and is referred to as both Viking and Norse. He earned the nickname “Leif the Lucky” after rescuing a crew of 15 shipwrecked Icelanders. Icelandic sagas tell us that Erikson established a settlement called Vinland (believed to be in northern Newfoundland at L’Anse aux Meadows) around the year 1001 A.D., four centuries before the birth of Columbus. Erikson was only 24 when he captained this voyage. He bought a boat and set out on commission by Norway’s King Olav I to bring Christianity to other lands. Erikson and his group settled and stayed at Vinland for a winter, before returning to Greenland.

The spelling of his name varies from culture to culture. Icelanders call him Leifur Eiríksson, Norwegians use Leiv Eiriksson and, in Old Norse, he was called Leifr Eiríksson. But the American observance uses the more familiar spelling – Leif Erikson. No matter the spelling variances, Leif Erikson’s name evokes the spirit of adventure and calls for a designated day to celebrate the bold and beloved explorer.