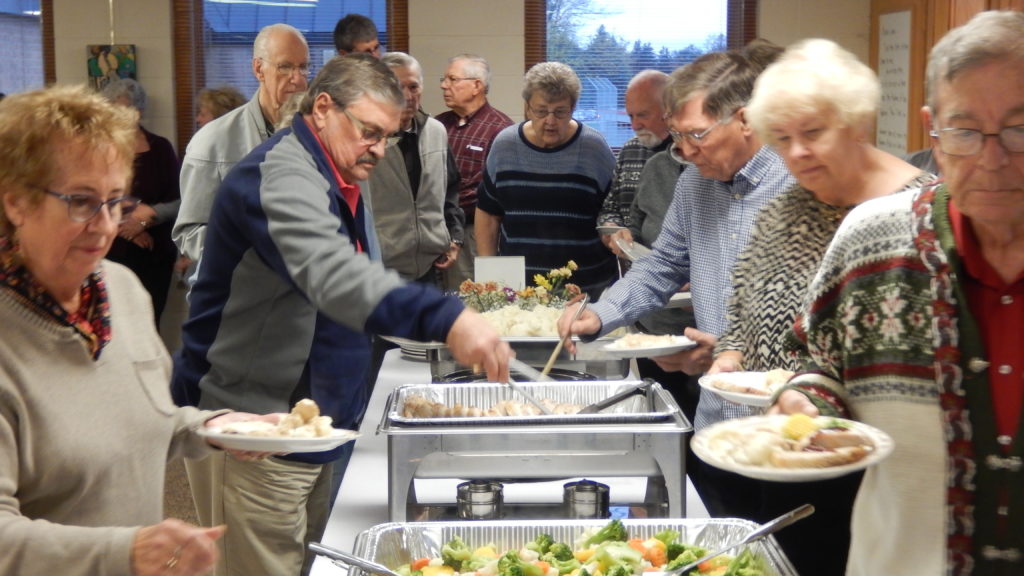 Another successful Membership Dinner at the October meeting. – Photo courtesy of Roger Josephson

Hei alle sammen!!  (Hi all)  The Ides of October and it is a BRRRR day.  Ok… I know it is not November or December, yet, but we have snow!!  Fortunately, this week is suppose to warm up a little and maybe we can get our nice October vaer “weather” in November.

At our last board meeting, we elected to have our annual Lefse and Bake Sale once again.  This is a good fundra “fundraiser” for us and we have fun making the Lefse and baked godbiter “goodies.”  The date of the sale will be Saturday, December 1 at the Washington Square Mall.  Now, in order to sell lefse, we have to make it!  We have set up the Thursday and Friday, November 29 and 30 to make the lefse and this will be done at Trinity Lutheran Church.  Dorothy Hoover will provide the detaljer “details” of the lefse making shifts, preparing the potatoes, etc.  Watch for her news in this newsletter and again at the November 13th Lodge meeting.

The Medlemskap Middag (Membership Dinner) was a huge success.  We served dinner to 82 persons… with 16 of this group being prospective members.  Thanks to Pam Skarie Catering for this excellent meal.  We also had an excellent program on fotografering “photography” presented to us by Jim C. Sinclair. Thank you Jim for your time and talent.

We will be planning for our Scandinavian Festival which is going to happen on March 1, 2019.  This will mark our 50th Jubileum “Anniversary” of Vikingland Lodge #495.  More to come on this topic in future months.

November means Board Elections and then Installation of the Board in December.  This year is going by exceedingly rask “fast,” but that is probably better than having it dra “drag” on and on and on.  If that would happen, we would not have more birthdays, holidays, and that would be a real DRA!

Greetings from your Social Director

Our membership dinner was a huge success!  Thanks to all who contributed in any way.  We have new members and that is always exciting as  it brings new ideas and perspectives.  Make sure we make them feel welcome!

November means lefse and that means we have 200 pounds of potatoes that Cheryl and Larry Olson picked for us.  Here are the plans. At our November meeting I will have the potatoes in 10 pound bags, complete with recipe, cream and butter.  Sign up and take them home, bring them to Trinity church for rolling out day November 29 and 30.  We will have sign up sheets for workers both days, 4 half day shifts.

We need mixers, ballers, rollers, fryers and packagers.  Oh also some tasters.  Both days will be a potluck lunch.  Saturday we also need helpers as that is Washington Square Mall Bazaar, where we have a booth to sell lefse and MANY OTHER BAKED GOODS OUR MEMBERS DONATE. Please bring your baked items Saturday morning before the sale starts at 10am.

This is our main fund raiser for the year and funds many of the projects we have as an organization.  So come to the November meeting  prepared to sign up for a little or a lot on these 3 days.

November is our SOUP AND SANDWICH night beginning 6pm.  Call Sharon Hittle 847-4822 if you would like to bring soup, sandwiches or bars/cookies.  Election of officers will take place and our program is Sons of Norway past and into the future.

Well we have a lot to look forward to and fun things to participate in.  See you November 13 at Union Central.

Sons of Norway 1-495 Annual membership dinner was held at Trinity Lutheran on October 9 with a catered dinner.

President Joe held up our District 1 Lodge of the Year plaques and our International 2017 Large Lodge of the year Plaque. 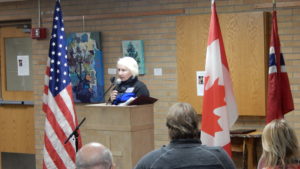 Linda Briard provided a history of the Sons of Norway at this year’s Membership Dinner. – Photo courtesy of Roger Josephson

Linda Briard reviewed a brief history of the SoN starting in l895 and talked about the annuity and life insurance products available.

Zone 3 leader of District 1 Jim Strandley congratulated us on our wonderful honors and told a little about our District which  runs from Canada to Texas.  Because we are so successful, he wants us to help other lodges improve.

Dorothy Hoover gave the 2019 nominating committee report, new officers will be elected in November.  She also reminded us about lefsa making and signing up to help with this project at the Nov. meeting.  Nov will be a soup and sandwich dinner at 6 pm.

Our guest speaker for the evening was Jim C. Sinclair who showed us wildlife and scenic photos from the area and from some of their family vacations. He also talked about using the computer to enhance some of his photos.  It was a wonderful program.

SPREAD THE WORD: INVITE A FRIEND: Before our next meeting, please consider asking a neighbor, friend or family member to join you as a first-time guest. Even if they aren’t ready to join as a member, they can help us spread a positive message about our friendly gatherings and welcoming Nordic spirit.

After more than a century abroad and 85 years at the bottom of the sea, Roald Amundsen’s expedition ship Maud has finally returned to Norway.

Maud was built in 1917 for Amundsen’s second exhibition to the Arctic and set sail from Vollen in Asker, Norway, the following year. The ship was intended to be a floating scientific research station to collect data across the North Pole. Unfortunately, numerous conflicts complicated the mission, and the Norwegian explorer was forced to sell the ship in 1925 to the Canadian Hudson Bay Company. Maud was then docked in Cambridge Bay, Canada, and used as a radio station and storage unit until she sank in 1931. 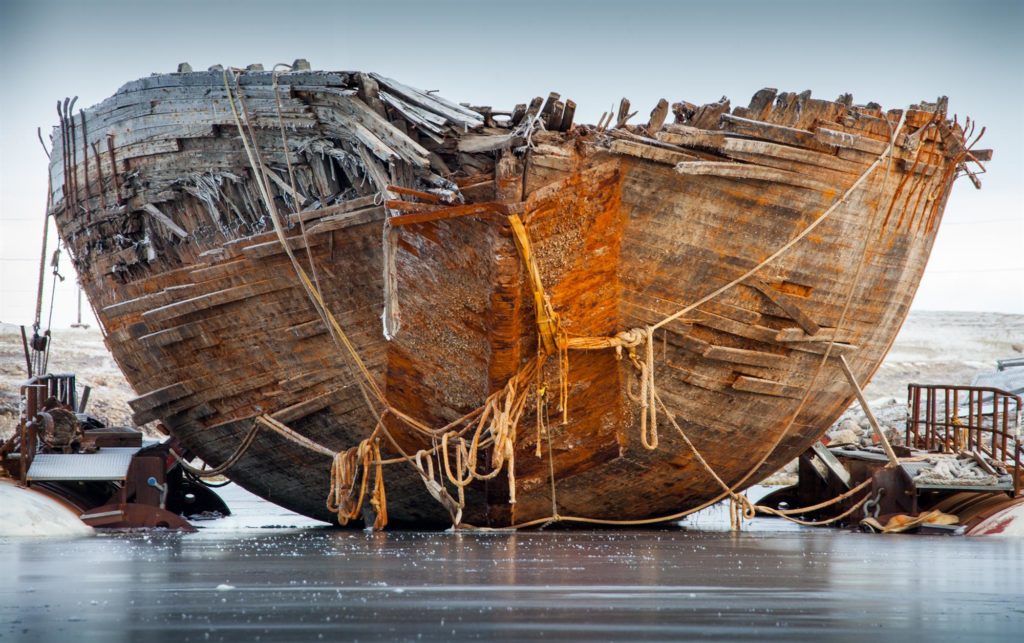 The Maud returns home to Norway

Several plans to retrieve Maud from the Canadian seafloor were started, but all fell flat. It wasn’t until 2011 when real estate company Tandberg Eiendom finally found success, and was able to help Maud reach surface in 2016. The journey home then took an additional two years, being towed by tugboat around Greenland and through the Atlantic Ocean, and was complete in August of 2018.

Maud now sits almost exactly where she was launched more than 100 years ago in Vollen, Norway. A museum will feature the ship’s remains and share her remarkable story while above and below sea level.

Greetings from the Cultural Director

For people going to Norway for the first time, they often wonder how Norwegians actually cope with the long, dark winters. How do you manage to stay positive when it’s dark when you go to work and dark when you go home. Its that way in Minnesota too. Here are some tips from some experienced Norwegians.

#1. Enjoy the sunlight when it’s there. Go outside and get some light on your face during the day, every day. A Good time to get your dose of vitamin D.

#2. Enjoy the benefits of the darkness! You can watch T.V. with no sunlight ruining your vision. Read that book you have been putting off for a long time. Make hot cocoa and eat chocolate without feeling guilty about not being outside. Norwegians tend to feel like they HAVE to be outside when it’s nice, so just enjoy the indoors when you have the chance.

#3. Your main reason is you can see the magnificent Northern Lights during the winter. So be thankful you get the chance to see the lights that dance in the sky above you.

#4. Dress to avoid the cold. Your chance to go shopping and get winter boots, layers of clothes, hats and mittens. Go get a new wool Norwegian sweater. Better to be warm when it’s dark than to be both freezing and trapped in the darkness. 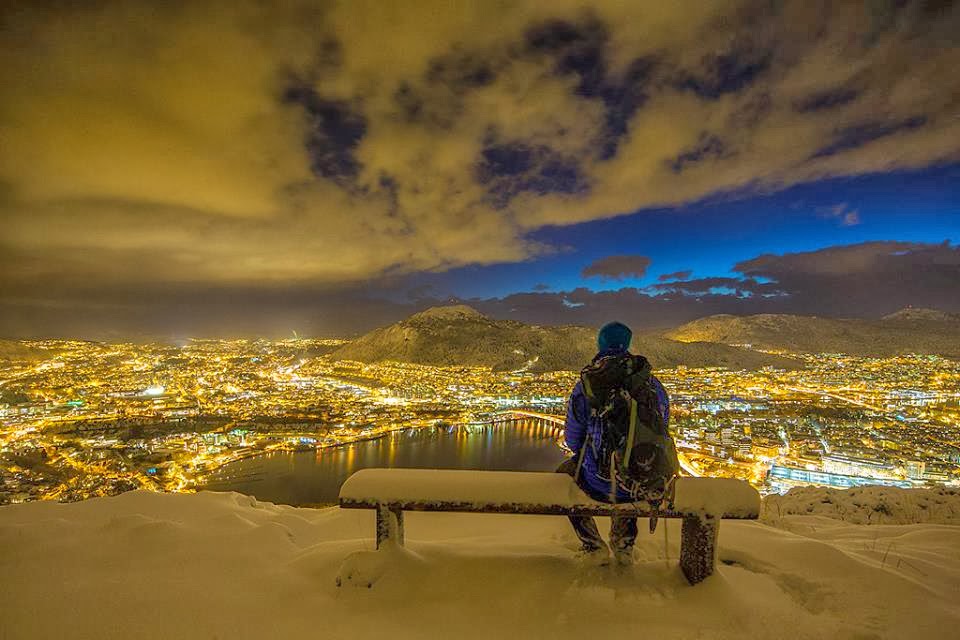 The first snow of the winter in Bergen, Norway

#5. The last tip; better to enjoy the dark season together with other people. Travel, meet new people, stay in hostels along your way. Meet other travelers from all over the world. What better ways to get ready for winter in Norway.

Try some of these tips for getting ready for winter in Minnesota also. Maybe I need an excuse to go shopping. Maybe a new pair of boots and mittens. Or a great idea to get a new Norwegian sweater. Stay warm on these cold nights. And have a wonderful Happy Thanksgiving!.

Thank you to everyone who helped make our Membership Dinner successful. Special thanks to those who helped with the setup and clean up! You helped our evening go so smoothly.

Thanks to the following members for bringing prospective members Tom & Kay Dahlen, Karen Merseth, Tom & Betty Schroeder, Rollie Kjos, Bob & Dorothy Hoover, Pat Haman, Milan Christianson. Remember to follow up with your guest regarding membership and get their application to Bonnie Mohs as soon as possible.

The world’s tallest wooden skyscraper is being built in Norway.

a little in English…Allowed to Belong to Two Countries

“It will be possible for Norwegians to keep their Norwegian passports. They can do that even if they become nationals of another country. The same will apply to foreign citizens who wish to become Norwegian. We are open to dual citizenship. This ensures that Norwegian law follows developments around the world. Connections to other countries are ever-increasing.” So says Jan Tore Sanner in a message to the press. He is the Minister of Knowledge and Integration.

All of the other Nordic countries have opened up for double citizenship. So have most of the countries in Europe.

The rule today is that only Norwegians can have citizenship. But there are several exceptions to the rule. Many foreigners seeking to become Norwegians have received dual citizenship, while Norwegians who become citizens of another country have not had the same opportunity. The government’s proposal makes it so people are treated more equally, says Sanner.

The government says that security is also an intention of the proposal. People convicted of terrorism may be deprived of their Norwegian citizenship. However, if they do not have dual citizenship, they can not be sent out of Norway.

The Norwegian government is setting its sights on becoming a tobacco-free society by 2035. As of July 2018, some new tactics are being employed to make cigarettes and snus, (a powdered tobacco product related to snuff) less attractive.

Tobacco products have long been required to feature large print warnings with realistic color photos depicting the health repercussions of tobacco use. Now the Norwegian Directorate of Health is making moves to deter children and young adults from ever taking up smoking or snus.

The neutral packaging requirement went into effect on July 1, 2018, and makes Norway the fourth country to require plain packaging. Tobacco products may no longer have any design logos, and all are required to be the same color, Pantone 448 C. This drab greenish brown color was chosen for Australia’s plain tobacco packaging campaign in 2016 after the hue was found to be the most visually offensive color to tobacco users.

To further dampen interest, all tobacco products must have the identical stark font and health warnings. The overall goal is not to make it illegal to buy or use tobacco, but to make the product as repellant as possible, especially to youth.