Our Scandinavian Festival is coming this Sunday from noon to 3 at Ecumen Forest Conference Center. We will have lots of mat (food), demonstrasjoner (demonstrations), Norswededane dansere (dancers), gjenstander (artifacts), as well as 50th jubileum (anniversary) t-shirts, mugs, and tote bags for sale.  A special addition to this year’s event will be the sale of many Scandinavian items from Rollie Kjos’s personal collection. Rollie has downsized and no longer has room for many of his collection and is offering them to our Lodge for sale to benefit the leire stipendier (camp scholarships). This is a wonderful way to help fund Norwegian Language Camp for our youth as well as decorate your home with beautiful kunstarbeid (art work). If you are willing to help with the Festival give Carol Turner a call at 234-8887. Be sure to come and support our Lodge and bring your family!

As we look forward to our March meeting be ready for the Famous Chili Dump! Bring a bowl of chili, we will add it to the pot and have our very own Vikingland Spansk (chili). It always turns out great with a variety of meats, beans and spices. Remember because we are having supper we begin at 6:00 pm. Come hungry and enjoy the fellowship.

Are you as ready for the arrival of vår  (spring) as much as I am? I think we have had enough snø (snow), I can’t even see out my patio door when sitting in my chair due to the snødrift (snow drift). The pile of snow from plowing our street is higher than my car. I think we have enough!

Looking forward to seeing you at the Festival as well as the meeting this month!

Our Mid Winter Scandinavian Festival is coming up soon on March 3 from 12 – 3. We will have lots of traditional food and craft tables as well as the NorSweDane  dancers that will wrap up the program at 2:30.  A great big thank you to all who have volunteered your talents and services to make this festival possible.  This year we will be at Ecumen in the Forest Conference Center, just go in the main entrance, there will be signs posted where it is.  The public is welcome, invite your friends and neighbors.

We are happy to welcome the following new members to Vikingland Lodge! Kevin Heap of Audubon joined in December and Tim Larson of Perham joined in February. Welcome to Vikingland!

Greeting from the Vikingland Foundation

April will be our big fund raiser for the foundation, as you know, the money we raise is given out to non-profit organizations in our community as well as to the International Foundation.  The organizations have all been so grateful, I wish you could hear some of the stories of how they are able to use the funds we give them.  If you have items your would like to donate to the Silent Auction, please let me know so we can plan on the number of tables we will need.  Thank you in advance for your generosity. 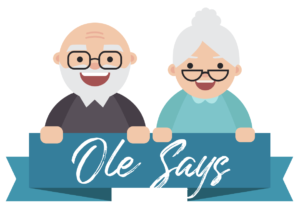 Sven and Ole were from Minnesota and went fishing in Canada and they returned with only one fish. “The vay I figger it, dat fish cost us $400 said Sven. “Vell,” said Ole, “At dat price it’s a good ting ve didn’t catch any more.”

Please send warm thoughts (varme tanker) and prayers (bønner) this month to Harold Sanders who had shoulder surgery and Milton Haugrud whose sister passed away.

SCHOLARSHIPS: Scholarship applications are due to Roger Josephson by May 1, 2019. You can apply online at sonsofnorwaydl.org/summer-camp/.

Oslo was recently named the world’s second healthiest city. Using key metrics like life expectancy at birth and work-life balance, the online home rental company, Spotahome, created a healthy index to rank 89 global cities. Of the global cities analyzed, Oslo and Helsinki were the only two Scandinavian countries to make the top 10.

While it’s no secret that Norway continues to top lists for work-life balance and happiness, Oslo also scored particularly high in green space, life expectancy and air/water quality. Since the city has already unveiled plans to go green by 2025, it’s easy to see why it ranked so high. The initiative includes making the city center car-free, and adding more pedestrian and bike friendly areas.

Additionally, the life expectancy in Norway is 84 years for women and 81 years for men, which is among the highest in the world. In total, Oslo scored an average of 6.61 points out of 10. Amsterdam took the number one spot on the list with an average of 6.97 points. To view the full list, visit spotahome.com/healthiest-cities-world.

Greeting from the Vikingland Social Director

It is snowing again today as I write this article!  Can you believe it? I think each month since November, it has been a snow/writing article day!

March is our CHILI DUMP.  Bring a pot of chili (temperature hot) and we will combine all chili in a large roaster.  mmmm-mmmm good.  Never has there been such a good recipe.  If you prefer to bring extra fixings such as cheese, crackers etc, contact Sharon Hittle 8474822.  Chili will be served at 6pm with meeting and program to follow.

Dave Melgard is our program,  He will do a sing-a-long with his guitar.  He says the songs will be familiar ones, so dust off your vocal chords and be ready to join in.

April program will be presented by our new associate members Dave and Carla Reitan.  Dave’s father was the originator of the Hostfest in Minot.  Dave is now at the helm and will tell us all about Hostfest.  Many of you have experienced Hostfest as have Bob and I and know just how wonderful and exciting it is.

May will bring our District 1 President as our speaker.  We will also have some musical entertainment,

June will be Scott and Mary Hoaby with music from South America (Mary’s birthplace).

July will be Habitat,  meeting with picnic dessert, and bandshell entertainment.  Just think, we will probably be complaining about the heat when we meet in July!

Until then, stay warm.

Actor and director Liv Ullmann is known throughout the world. In December she turned 80 years old. She’ll be given a proper celebration. Prime Minister Erna Solberg is among those who will pay tribute.

Liv Ullmann is one of Norway’s international stars. As an actor she has been nominated for an Oscar twice. She has not won the highly regarded statuette, but she has received many other awards, both as an actor and director.

Liv Ullmann has lived abroad for years. But there has never been any doubt about her home turf. The newspaper Dagbladet recently visited her in Florida in the U.S. The journalist asked her if she still feels Norwegian.

“Oh, yes! I have traveled a lot, at times. But Norway will always be my home. Always,” she said.

Ullmann played her first role in the Rogaland Theater in 1957. Then she played the girl Anne Frank. She became known through the role of Nora in the play “A Doll’s House,” but then she became a film actor. Ullmann played in 10 films directed by Ingmar Bergman.

Bonnie called the meeting to order at 6:03.  The minutes were approved as corrected and the Treasurer’s report by Beth Tinjum was filed for audit with cash on hand of $6,087.51.

Reports of the upcoming Scandinavian  Festival on March 3 were given by Bonnie, Carol and Dorothy.  Set up will be Saturday March 2  at 10 am Set up on March 3 will begin at 11 am and clean up will begin at 3 pm.  The folk dancers are coming at 2:30 pm. Training for making open  face sandwiches will be at Dorothy’s on February 28 at noon.  Christopher coordinated an appearance for Dorothy, Pat and Carl on Hodge Podge at KDLM on February 28. Christopher (Cora+Krist) also designed and donated the posters to be distributed around the area.

President Bonnie reported that Dorothy, Beth, Ardys and Bonnie went to an officer training session sponsored by the district in Bemidji on Saturday.  She has filled out paper work to refund her mileage.

Bob Hoover reported that sports cards are available for the new year.

Carol Turner reported that the Foundation Silent auction will be held at the April meeting and people should let her know what they are bringing so she has enough tables set up.

Christopher reported on publicity and has ordered 50th Anniversary samples and they will be available for sale and ordering at our Scandinavian Festival in March. We need to get announcements about meetings in the Detroit Lakes paper.

Dorothy Hoover reported on Social and has programs finalized through July.  March will be a singalong with David Melgaard, April Dave Reitan will talk about organizing the Host Fest in Minot every year. May will be District President Dennis Rusinko will be giving the program.  June  will be Scott and Mary Hoapy with Spanish music and July will be our Habitat picnic sponsorship with dessert following in the City Park.  She also announced that there would be stamp cutting on February 13 at 1:30. Social Sharon has a sign up lunch sheet.

Roger reported on scholarships and has one person signed up for language camp scholarship so far.

The next board meeting will be at 4:45 followed by the chili feed at 6 pm. Ardys Horner, Secretary