Hei alle sammen!!  (Hi all)  It’s slow-down time for our Lodge… well, maybe not so much, as we have lots of things skjer (happening) in June and July.  By the time you read this, the following will have happened:

About 13 persons volunteered to serve the June 14 Habitat For Humanity dinner prior to the Park Rapids concert in the park.  The meal was sponset (sponsored) by The Sons of Norway Vikingland Lodge #495 through a $250 grant from Thrivent.  Thanks to the follow for their time and effort: ­Milan C., Pam M., Kathy R., Tom and Betty S., Jim and Gerry L., Karen M., Betty C., Larry and Cheryl O., and Roger and Jan L.

We had our Vikingland Lodge #495 Viking Float in the Perham Parade on June 15.  This was fun and we had some smabarn (young children) and some eldre barn (elderly children) riding the float and passing out candy to youngsters in the parade crowd.  This was fun… come and join us for the next one.  Participants included, Dave and Beve M., Larry and Cheryl O., Patricia H. and 2 granddaughters, Will J., Milan C., Joe and Karen M. and 2 grandsons.  A big thanks to Larry Olson for bringing the float to and from Perham and driving in the parade and also for his carpentry skills in designing and installing a handrail, which was much needed.

On June 18, we had a wonderful concert by Trio Con Brio, whom we sponsored through our SON Lodge.  This was held at First Lutheran Church and refreshments and godbiter (goodies) were served following the concert.  A free will offering went to Trio Con Brio for their expenses. Thanks to those who set up for the lunch, and those who brought goodies.

Coming up on July 10, we have our regularly scheduled meeting, following the Habitat For Humanity dinner which will be held in the East Shelter.  If you wish to delta (participate) in the dinner (free will offering… Suggested $5 per person), have dinner from 5:30-6:15 pm and then join us for a short lodge meeting in the West ­­Shelter.  There will be “treats available.”  The meeting will commence at 6:15 and conclude before the concert begins, which is at 7 PM.

On August 14, we will get back to having our lodge meetings at Union Central. 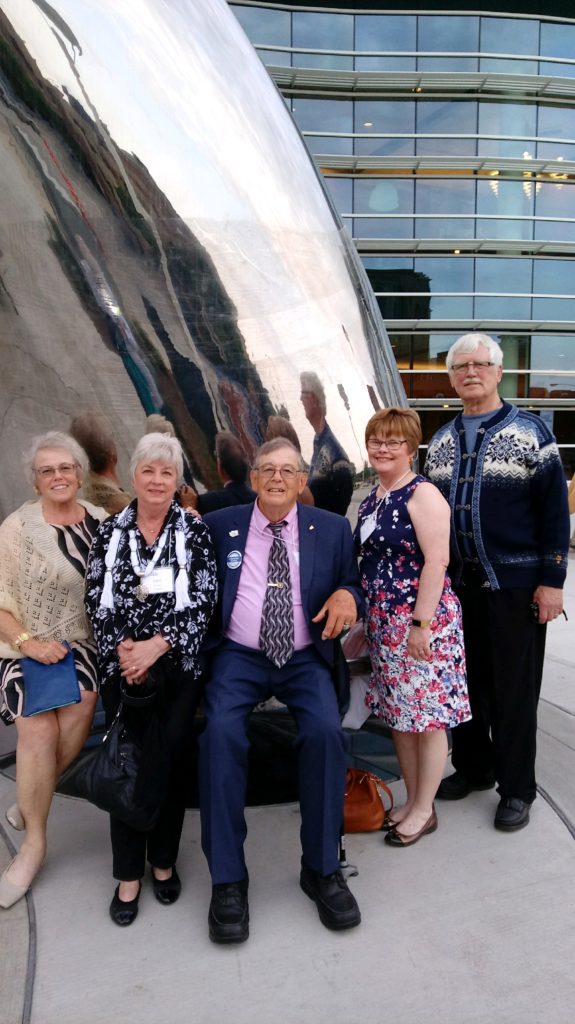 Vikingland Lodge had by far the most entries at this year’s Folk Art Festival, part of the District 1 Convention in Rochester. Thanks to all who participated, here are the entries.

Big thanks to Roger Josephson for taking these pictures at the festival and submitting them for you to see. 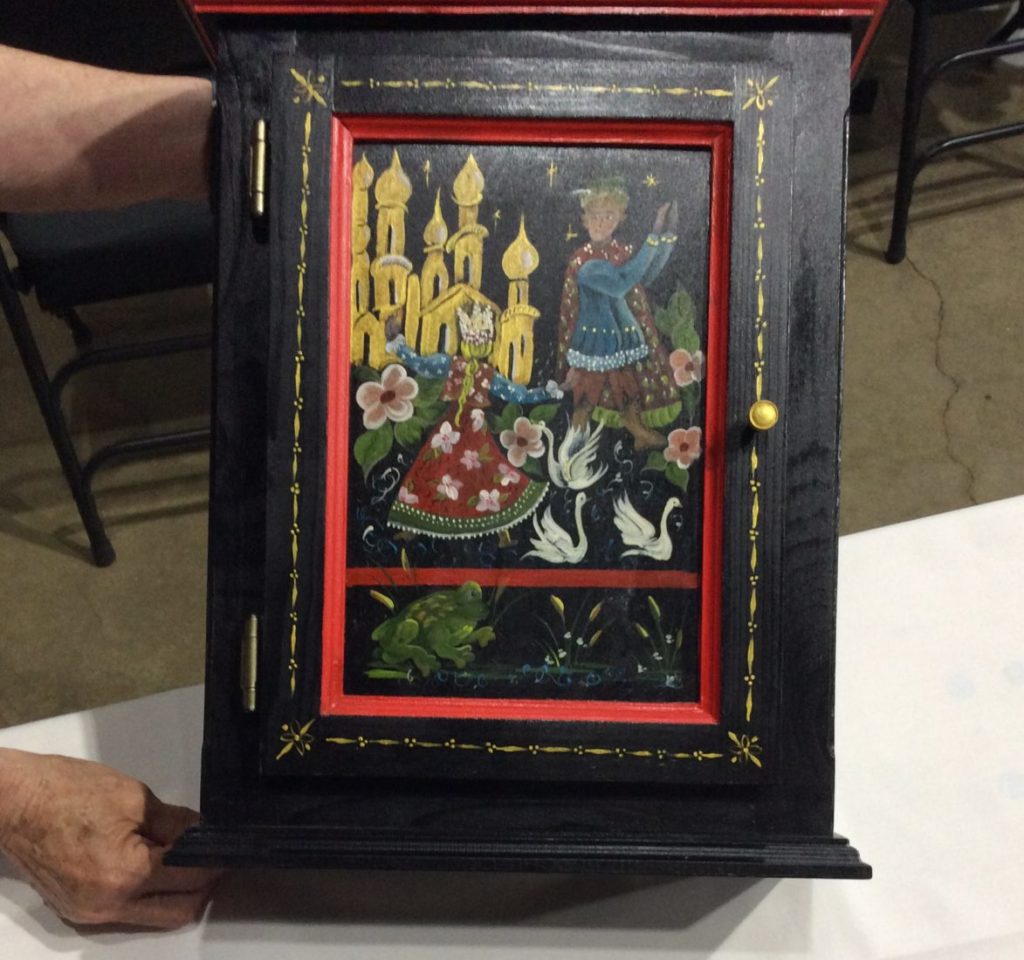 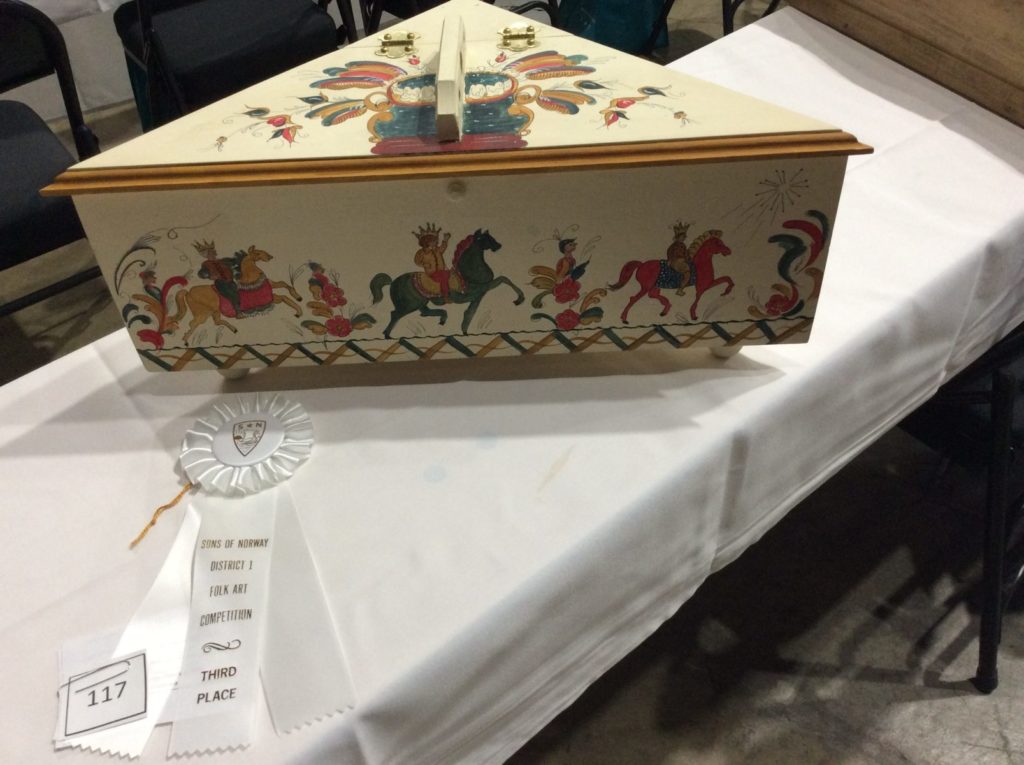 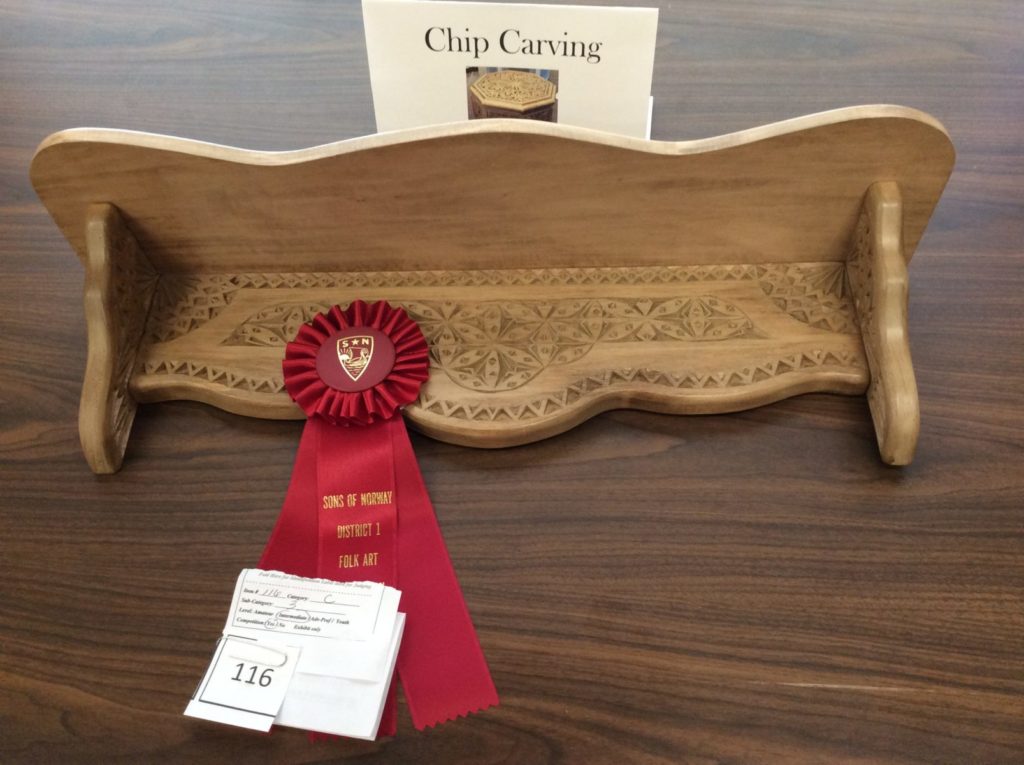 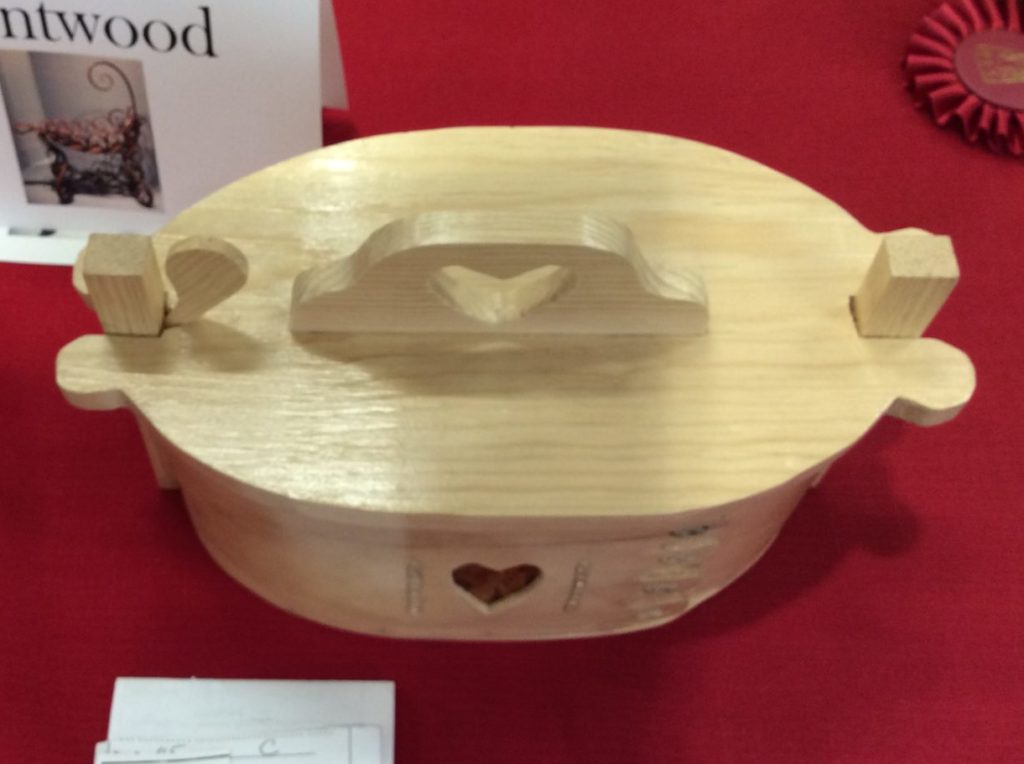 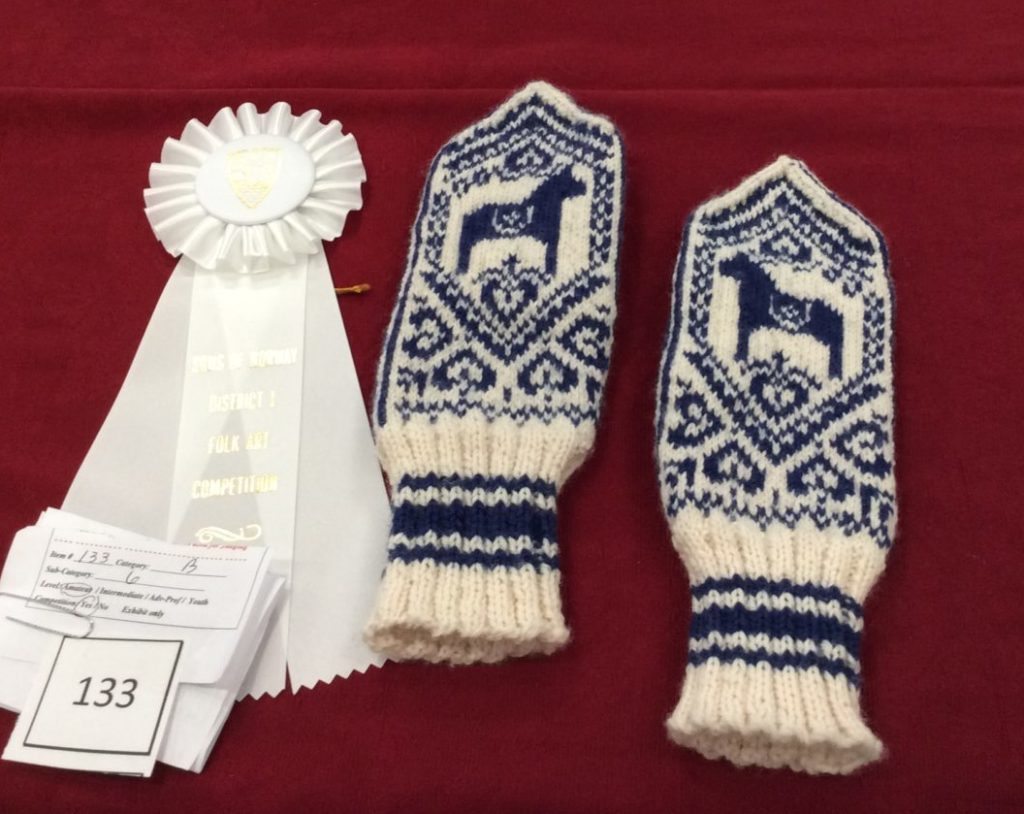 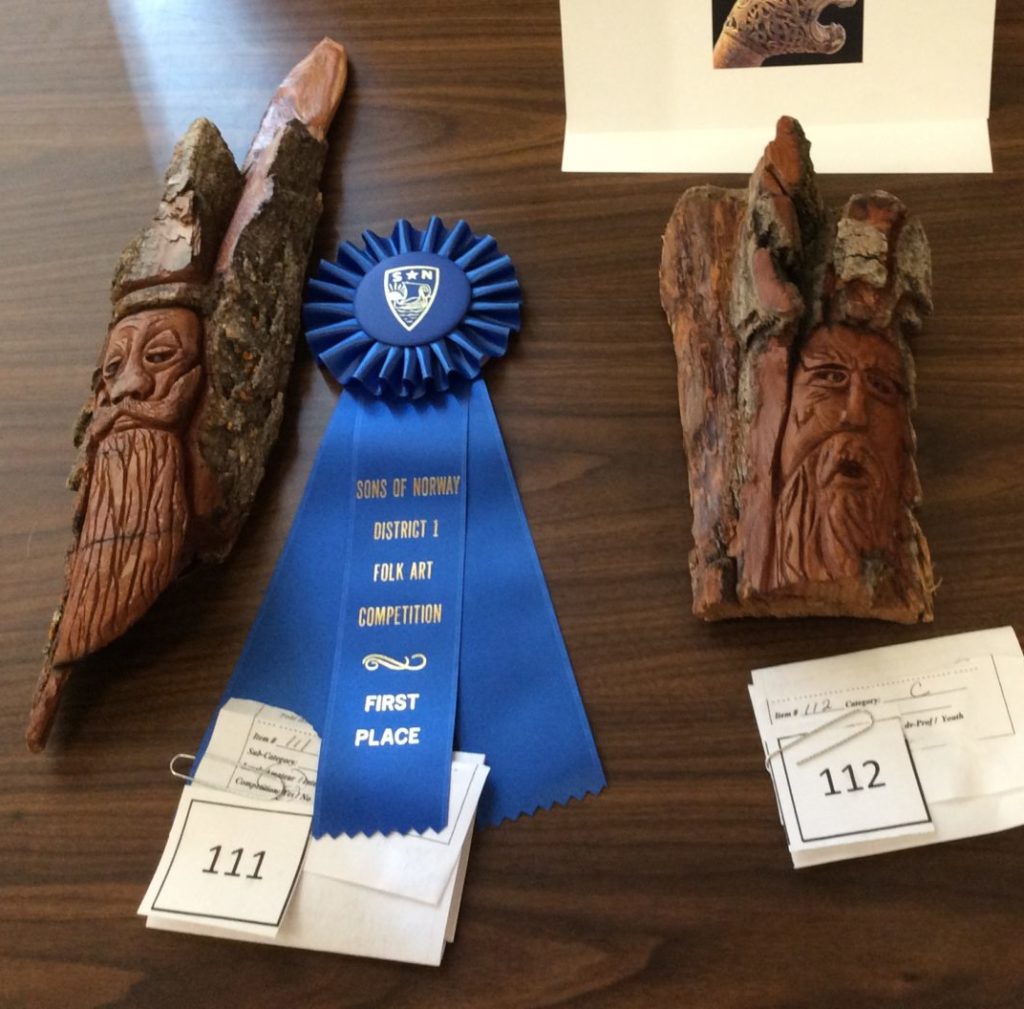 Please send warm thoughts (varme tanker) and prayers (bønner) this month to Carol Turner who is recovering from a neck fracture, Harold Sanders on the loss of his wife, Lauryl Ivers who had hip replacement surgery, JoAnn Schott and family  as JoAnn’s granddaughter was born pre-mature in March and is still in NICU, and Bob Hoover who is undergoing treatments for bladder cancer that has returned.

PARADE FLOAT VOLUNTEERS NEEDED: During the summer months we like to participate in various parades in the area to promote the Lodge and Sons of Norway. We have a Viking ship that we ride in. Help showcase our Norwegian Pride and volunteer to participate at various parades this summer. To volunteer, email Dorothy Hoover at dorothy.hoover@sonsofnorwaydl.org or by phone at 218-849-2275.

Greetings from the Social Director

Trio Con Brio,  wow, what a performance!  Tuesday June 19 we hosted the talented trio from Stockholm, Sweden.  What a treat it was for the 107 folks who attended.  A variety of music played on piano, flute, oboe and English horn. They plan on returning in 2020. Put that on your calendar.

July is our picnic in the park.  Here is the plan.  If interested have a meal with Habitat, then come to the neighboring shelter for a meeting and dessert.  (Members with last names M thru Z will bring a dessert to pass) then the free concert in the bandshell.  Weather permitting it should be another fun night with our fellow members.

I will be giving a short report of the District 1 convention held in Rochester at a later meeting but you should know we had entries in the folk art from Ardy Horner, Carol Turner, Joe Merseth, Adam Hoover, Bob Hoover and myself.  We all won ribbons!  Congratulations!

Enjoy your summer, See you in July.

Update From The Cultural Director

I was thinking of what happens in July in Detroit Lakes, well of course the Becker County fair comes along with carnival rides, demolition derbys, and 4-H exhibits.  One of the main attractions, I think is the never ending array of fair food. In Norway, there are signature Norwegian fare also.  Most of us have heard or even tasted these wonderful foods so lets talk about them.

Brown cheese–Brunost, isn’t actually cheese at all.  It’s made from whey that’s typically tossed out during the cheese-making process.  In Norway the whey is boiled for a long time until it caramelizes into a salty, fudge-y brown diamond.  It’s usually presented with a slicer that shaves off thin pieces for placement atop toast at breakfast.  It’s also used as a flavor–dishes like “brown cheese ice cream” are pretty common.  Well not for me at least.

Norwegians love their fish  You’ll see it in every form imaginable.  It comes in sauces, fried, poached, grilled, dried, and pickled.  If you don’t like it the first time you try it-don’t quit.  Just give it a shot in a different form.  There’s certainly one that will speak to you.  I love fiskeboller-white fish cod blended with ingredients formed into a ball.  Serve with white sauce over mashed potatoes or bread.  I might have to go pick up a can for myself.

In the summer Norway has become a berry buffet.  Lingonberries, bilberries and of course cloudberries.  This orange-pink delacy isn’t grown commercially so it’s highly sought after when it’s in season.  Often served in desserts.

A main stay during the summer both here and Norway.  We call them hot dogs, Norwegians call them polse. A fast food item similar to a hot dog.  You’ll see them at gas stations, grocery stores and street food stalls.  They have taken on many forms too.  In soups, stews, as a meal with potatoes and even at Christmas time.

So, go try a new food if you haven’t yet had any of these.  Most I think you can find around here or a bigger city that carries Norwegian foods.  Have a great time exploring the many food choices at the Fair this year also.  Looking forward to it. 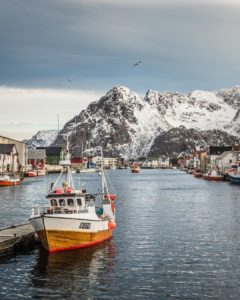 Stunning scenery, breathtaking coastlines and the meanest and biggest fish. All are reasons why cod fishing in Norway is an exhilarating and addictive sport. Every year, the World Cod Fishing Championship takes place on the waters near Svolvær, located on the island of Austvågøya in the Lofoten archipelago. More than 5,000 visitors gather on the small island to watch 80 fishing boats and almost 600 participants battle to set records.

The competition covers both total catch and the biggest individual fish. Cod are often massive in size and weight, usually exceeding 30 pounds. Both amateurs and professionals brave the cooler temperatures and seasickness to celebrate the fishing season in Lofoten. “Skrei” is the Norwegian name for cod and is a major source of income for many locals. After the competition, the cod is sold to restaurants and stores across the country.

This year the competition was held in March, and the turnout was impressive. Fredrik Mørch-Reiersen took the prize of reeling in a 52-pounder. See the full results at https://www.vmiskreifiske.no. 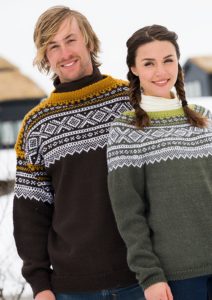 History of the Marius Sweater

The Marius Sweater was designed in 1953 by Unn Søiland, and sold to Sandnes Woolen Factory in 1953 as a knitting pattern. Today it is known as the best-selling and most-knitted pattern in Norway. It is considered a Norwegian national sweater, an icon that says something about the Norwegians’ enthusiastic relationship with trips in the woods and fields, in the free Norwegian nature.

Unn Søiland Dale received the King’s Medal of Merit in gold for her life-long pioneering work to develop Norwegian knitting traditions and designs for hand knitting and wool, and to make Norwegian woolen textiles known internationally.

Unn Søiland was the first woman to become a member of the Norwegian Federation of Industries, when she organized women who knitted throughout Norway, which was regarded as a “cottage industry.” Over the years, she organized more than 1,000 Norwegian women for her production.

She designed and produced hand-knitted goods for German Uli Richter. She designed patterns for the American company McGregor, and later in the 90s she designed the most exclusive handknits for the French Christian Dior, Hubert de Givenchy and Castelbajac. She is the only Norwegian designer to have had handknits on French catwalks in Paris.

The quality of the craft in Unn Søiland’s organized hand-knitting production, coupled with her elegant designs, was one of the reasons this became a major export article – and why the term “Norwegian sweaters” has such a high value for most foreigners today.

Stein Eriksen was the elder brother of Marius Eriksen, and an Olympic gold medalist in slalom in the Winter Olympics in Oslo 1952. Stein was the more famous of the two brothers, but he could not be a paid model as he would risk losing his amateur status in the Olympic Games. That’s why his brother Marius took the job. [Marius] was also an excellent skier, he was a war hero and an actor in the movie “Troll i Ord” [expression meaning if you say something dangerous, it may come true through the “troll in your words”] in which he wore one of Unn Søiland’s sweaters. Marius Eriksen gave his name to the sweater on the pattern for Sandnes Garn that year. That’s how “the Marius sweater” got its name, and became famous because the film was a big success all over Norway. Everyone wanted to knit Marius sweaters.

Pssst: Are you keeping your Sons of Norway Membership a secret?

Spread the word about the fun and fellowship we share as Sons of Norway members. The more the merrier! Nonmember friends and family are welcome to attend a lodge meeting, volunteer activity or an event as your guest (even if they aren’t ready to sign up yet). Remember, anyone with an interest in Nordic culture and heritage is welcome to join Sons of Norway.